The city fared far better than others in the West during the pandemic and recession, with unemployment down to almost what it was in 2019. The total number of construction workers did not change significantly throughout the pandemic and is slightly above what it was in March of last year. This is impressive, especially compared to cities like Las Vegas, which saw an unemployment rate of almost 35%. Government-related construction is expected to see a lot of attention in the future, as the city is in the process of building a new water reclamation facility and upgrading the Utah State Correctional Facility. There are also plans for a new data center and a new concourse for the Salt Lake City International Airport in the works. Salt Lake City makes up just over half of Utah’s GDP, so it shouldn’t be surprising that cost indices here are almost the same as the rest of Utah. These are quite a bit higher than the rest of the US, and we expect them to fall given the estimated decline in construction. 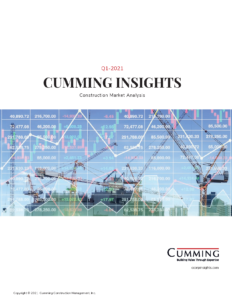