Despite a blip in 2017, the Orlando market has seen growth over the last eight years, hitting double digits almost every year.

While this is impressive, it also highlights the boom and bust market conditions in Florida — when a recession lands it is hit hard, but then bounces back just as hard when the market picks up. This year has seen a small decline in activity as the effects of market insecurity have revealed themselves once again. 2020 will also see a slight step back in construction activity before increases resume in 2021. Total construction lands in the $12 billion range, with residential accounting for half of this, followed by infrastructure which accounts for 25% of the total volume. Non-residential construction looks to be steady over the coming years and is expected to see minor increases moving forward before breaking the $6 billion mark in 2022. Private development is the key driver for the market, far surpassing public spending, and it would appear that a large portion of project funding is being received from out-of-state areas such as Los Angeles and New York. Orlando has benefited from the influx of skilled trade, which continued to increase in Q3 with a high of almost 90,000 workers employed. This has helped to keep escalation at a reasonable average of 4.5%, despite construction spending way above the national average. Overall, the market is looking steady and promising for the region. 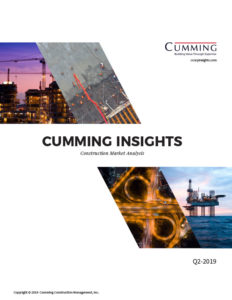