Chicago has one of the most diverse economies of any city in the country. This spared Chicago the fate of other cities in the Rust Belt, which saw dramatic declines in population and standard of living as manufacturing moved abroad.

Instead, the construction market here has been declining due to demographics rather than economics. Cities on the West Coast experiencing unprecedented growth have a constant need for new residential, commercial, and infrastructure projects. This is simply not the case here. Chicago has instead focused on upgrading and modernizing existing facilities, with renovations making up a large share of volume.

Chicago’s residential sector experienced the same spike in demand in 2021 as many other markets. But because it is a small part of the overall market, this was not enough to offset downturns in other sectors. Combined with issues in the infrastructure and commercial sectors, the market declined in 2021 and 2022. Looking ahead, however, Chicago’s position at the center of the nation’s railroad and airline networks positions it to benefit from reshoring businesses. 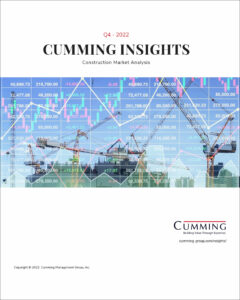